skip to main | skip to sidebar

A visit to the customs- and Rhine river harbour of the city of Mainz in Germany. Photos taken over a time range of 2,5 years from 2008 on.

The area is going to experience massive change due to the city development project "Zollhafen Quartier" and the movement of the container terminals to a new harbour site a bit further down along the river Rhine.

Posted by Peter Molz at 2:33 PM No comments:

In 2009 the greek singer and entertainer Dimos Kassapidis performed several songs on different beaches on Samos island.
Here he is depicted as "caveman with guitar" on Balos beach! 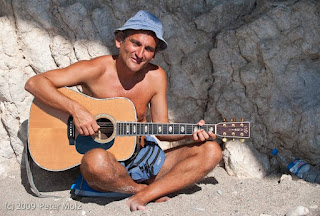 "Live from Balos beach": you can listen to him singing the song: "If I needed you" with the waves rolling on Balos beach in the background. The second song Dimos sings together with his friend Peter. It is the famous "California Dreaming".

Here are some of the videoclips from Balos and Pefkos beach in the south, and Mikró Seitáni beach in the northwest of the island :

In the northwest of the island of Samos in Greece, a beautiful coast with 2 beaches and several coves can be experienced.

Come along on an excursion to the breathtaking beauty of the northwest coast of Samos island in Greece. Well, if you are willing to walk, since no road is leading there! Don't forget to bring along with you enough drinking water and fresh fruits. No taverns over there! ;-)

Walking under dark pine trees or silvergreen olive trees on that stoney and dusty footpath that leads up and down along the coast to the remote Seϊtáni beaches with their crystal-clear waters.

Spending the afternoon on the beautiful Mikró Seϊtáni Beach, listening to the sound of the waves and the message Dimos wants to offer you!

The wild Seϊtáni coast with the two main beaches "Megálo Seϊtáni" and "Mikró Seϊtáni" is an example for parts of Samos island, where most of the normal tourists will never go to, because it is not organized and easy to get there.

A visit to Mikró Seϊtáni beach / Samos, Greece from Peter Molz on Vimeo.

Information with regards to the different groups of Tom Jet (Tom Jeutter) please find under Goldenoldies finden.
Posted by Peter Molz at 9:47 PM No comments:

One of these rare occasions, when magic is in the air. Late at night we came to a place called "Karafaki" in the port of Pythagorio on the island of Samos. After some time, my friend Jiannis Loulourgas, luthier and singer/bouzouki player, came walking along the harbour on his way home, but decided to stop and join us at our table for a drink or two.

We convinced him to play some songs for us despite the fact that he already had played all evening in a restaurant. So he opened his bouzouki case again, took out his bouzouki and sang and played a couple of songs for us. This is pure music, a voice and a bouzouki, nothing more!

I was glad to have my audio recorder with me. Here is one of the songs he sang in that night: "S'agapo yiati eisai oraia". A beautiful traditional song originating from Asia Minor. Listen and sit with us - at least acoustically - at our table in that night of September 27th, 2008.
In the background you can even hear the music of a tavern nearby.

The photos of Jiannis depicted in this presentation I took in the summer of 2008 at a different site in Pythagorio called "Notos".

Posted by Peter Molz at 7:40 PM No comments:

This presentation shows some impressions from my visits to the small village of Avlákia and the beautiful Tsabou Beach, located in close vicinity to each other on the north coast of the east aegean island of Samos in Greece.

Avlákia will not reveal its beauties if you just pass through with a car on the main road along the coast, as I did for many years! Like I did, you need to stop there and stroll around the narrow lanes and tiny places to discover the charming environment along the seaside with the beaches (pebbles), several hotels and taverns.

The beautiful north coast of Samos: Avlákia and Tsabou from Peter Molz on Vimeo.

Posted by Peter Molz at 8:51 PM No comments:

The old town of Brasov / Romania in December

During a journey through Transilvania in December, I was paying a visit to the old town of Brasov/Kronstadt in Romania.

Posted by Peter Molz at 8:40 PM No comments:

What is this blog all about?

This weblog is intended to show some of my multimedia work related to the region I live or to regions of the world where I travelled to.